I have been a bona fide born again christian all my life. I was taught to trust and fear God, love Jesus, believe in the Bible and that Christianity was the only true Way. God was good, just and almighty, and He kept his eye on me. He was looking for good and bad, and was always considering whether I was worthy of Him or not. And for years I thought I was fine with that.
But I was in a constant state of bad conscience with feelings of not being quite good enough, not quite measuring up.

Then things happened in my life that made me really question what I believed. In 2010 my husband was diagnosed with leukemia, was successfully treated, and has made it so far.
In July 2012 our 29 year old son died.

I was asked/told "isn't is wonderful to have God in your life to help you through this?" and “the Lord will give you strength”.
These statements made it possible for me to verbalize thoughts I had already had.
I discovered that when I really needed him, God was not there. There was nothing there. It had all been theory, it did not work in real life. Whatever strength has gotten me through the last 3 years, I have found in myself. God simply was not there.

I started thinking that what I had been taught couldn’t possibly be true. I realized that I had to think things through for myself. I could no longer blindly accept what I had been told, and ended up having to reevaluate everything I had believed in so far.

So I talked to therapists, ministers and friends, and I was challenged to define my image of god. As it turned out, I had to redefine god totally, and I found that my traditional god fell apart. I realized I had to get rid of some old baggage for my life to make sense again.

My studies and thoughts over the last months have led me to this:

I believe that someone/something, a creator/god, created the universe and all living things in it. I think two sets of laws were given. Physical laws make the physical universe, including our world, work, and spiritual laws make us divine beings. I think that the spiritual laws give us resources that we can bring out, develop and use to get us through whatever life brings.

I also think it stops there. From there on we are on our own. I no longer believe in a personal god that interacts with me or with humanity as a whole.
We are each of us responsible for our own lives which we create with our very powerful thoughts. We, and our thoughts are energy, and the frequency that we radiate to the universe is equally returned to us. So if we radiate negativity, negativity is returned. Likewise with love, positivity and gratitude. If we really knew how strong this effect is, we would never again let a negative thought cross our mind.

I also think random things happen. Like the fact that I was born in one of the richest countries in the world, with all the rights and privileges that involves. It means that my husband could have a million dollar treatment that didn't cost us a cent. Our son also had all the free medical help he needed.
Another point is that my part of the world hardly ever experiences natural disasters.

It seems unlikely that some god should be in a position to pick and choose who gets to be born where, who wins and who loses in this game.

The distribution of good and evil seems to be evenly split in and between christian and secular circles, so is there really any “power” in the gospel?

Blaming it on free will, evil or god's mysterious ways is just an easy way to excuse god from any responsibility, if one believes that he is in charge. When we let our egos take over, evil things happen, but we can not blame it on some evil being outside ourselves.

It seems unreasonable to me that a “good god” would condemn anyone to eternal damnation for not believing or loving him the “right“ way. I don't think we were born deserving a death sentence, nor that we at some point grew into evil beings. I believe we were designed and created acceptable, and stay that way. No alternative plan is needed. I am done with a god that needs to be feared.

Consequently, when I believe there is no hell, there is also nothing I need to be saved from, and the whole sin, salvation and reconciliation idea falls to pieces.

I think our purpose on this earth is, among other things, love and gratitude, for ourselves, those close to us, all mankind, nature and our environment. This is also the essence of the christian values I have been taught. But I would be arrogant if I claimed them to be only christian values. These thoughts are also included in other ancient scriptures, many of which were written down long before the christian bible.

I think the bible was inspired by man's divinity. As I can no longer believe in a personal god that interacts with us, the bible can not have been influenced by such a god. But I think that, in addition to a lot of material that only concerns the time when it was written, it also contains much wisdom, and that the most important principles it teaches are love, gratitude, equality, acceptance and forgiveness, and they are good life guidelines.

We live in a universe that has more than 500 billion galaxies, with more that 100 billion solar systems in each one. I think everything was made by the same creator, and that the physical and spiritual laws govern them all.
How likely is it that the creator would choose one area, on one planet, in one solar system, in one galaxy as his favorite place and favorite people? Most likely there are more planets just like ours. To claim that it is not so would be us limiting the Creator.


I find it absurd that we have taken a 4000 year old Bedouin cult, with the attitudes and traditions that existed then, and turned it into a guide for life in 2013, and expect it to work!

So as it turned out, the image I had of God was totally wrong for me, and I had to change it for my life to make sense. For now, these thoughts work for me. All our beliefs are interpretations, either our own or someone else’s, and each of us has to choose what’s right for us.

My testimony is that I have never felt so free and liberated as I do now! I am rid of all burdens and striving, and the do's and don'ts in order to be accepted by the Being who created me. I consider this my spiritual awakening, and I rejoice in it. 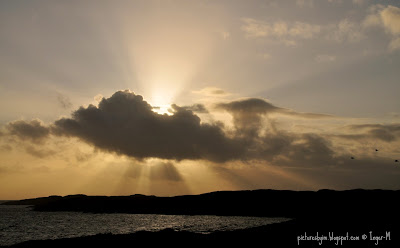 My other two blogs:

A picture in time. A photo blog.

Journey to life. Our journey through Sigve's leukemia diagnosis and stem cell transplant.